John McCain Would Want You to Wear Sunscreen

John McCain was a survivor.  On the battlefield, in politics, and like millions of Americans, a skin cancer survivor. 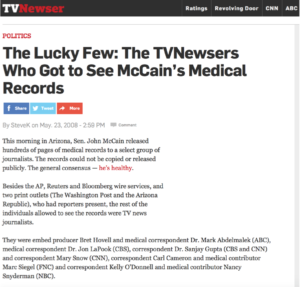 John McCain battled melanoma, the more serious type of skin cancer, on and off for about 25 years.

As I remember John McCain, I think back on one of my first assignments for ABC News.  I was lucky enough to travel to Fountain Hills, Arizona, where I reviewed nearly 1200 pages of McCain’s medical records during his 2008 presidential bid.  A look at the health of a presidential candidate during a time when some were questioning whether he was healthy enough for the office of President of the United States.

A journey through a medical record can be a unique form of intimacy into a person’s life.

And this week as we remember John McCain and celebrate his service to our country, one line in that medical record I’ve gone back to often is that John McCain was a sunscreen believer.  And his doctors took note too, writing in his medical record that Mccain, “continues with his excellent habits of photo-protection. He’s doing a great job!”

So, thank you John McCain for your service to our country and for sharing lessons about skin cancer with all of us.

And I bet, John McCain would want you to wear your sunscreen too.