Reporter’s Notebook: On National Doctors’ Day, a look at the new Hippocratic oath 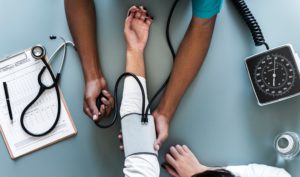 National Doctors’ Day (Photo courtesy of Unsplash: Photos for Everyone)

This post also appeared on abcnews.com as a  Reporter’s Notebook.

This spring, nearly 20,000 medical students will graduate from medical schools across the country and will likely be asked to raise their hands for a new kind of Hippocratic Oath, one that now emphasizes a patient’s right to choose their own destiny.

The Hippocratic oath is a 2,500-year-old pledge doctors take outlining the professional duties and ethical principles the profession holds sacred. The first modern version of the Hippocratic oath was adopted in 1948. The version released in November by the World Medical Association in Chicago took two years to finalize and is the ancient text’s first ever major update. A new name was proposed as well: “The Physician’s Pledge.”

In a Journal of the American Medical Association article, Dr. Ramin Walter Parsa-Parsi, chair of the World Medical Association Declaration of Geneva workgroup, writes the changes “have enabled this pivotal document to more accurately reflect the challenges and needs of the modern medical profession.”

Of course, patients were at the forefront in all versions of the historic document, but now there’s a reminder to prioritize a patient’s autonomy. It’s hard to confine a complex medical ethics concept like “patient autonomy” to one definition, but the top hit on Google does a good job: “The right of patients to make decisions about their medical care without their health care provider trying to influence the decision.”

Practically and emotionally, it’s not always easy when you don’t agree with a patient’s desires, but I’ve learned a lot about being a doctor just by asking patients what they want next. I still have patients that ask me to decide for them on what’s best, but even in those cases we always end with deciding together.

Another interesting change to the pledge is a renewed call for physicians to take care of each other in the giant “House of Medicine” that at times can stress relationships just like any other profession. The first version of the oath in 1948 asked a doctor to “behave to his colleagues as he would have them behave to him.” That it referred to doctors as men is not lost on anyone today, but the language is reflective of what medicine looked like in the 1950s. According to the Association of American Medical Colleges, in 1950 just 6 percent of doctors were women. But today, there are just as many female medical students as male medical students in American medical schools.

In 2006, the line about colleagues changed to “My colleagues will be my sisters and brothers.” And in 2017, there was a renewed call to treat each other well: “I WILL GIVE to my teachers, colleagues, and students the respect and gratitude that is their due.”

So on this National Doctors’ Day, I say thank you to Dr. Timothy Johnson, one of my mentors and one of the first doctors to receive the distinction of “America’s doctor” as ABC News’ former chief medical editor. And on that new Hippocratic oath, I checked in with Dr. Tim today, the doctor who took me under his wing to help launch my journalism career a decade ago. He said, “I think the changes are spectacular — and long overdue. They accurately reflect the dramatic changes in relations between doctors and patients that have occurred in the past several decades.”

Dr. Mark Abdelmalek is an ABC News medical contributor. He is board-certified with the American Board of Dermatology and a Mohs surgeon specializing in the treatment of skin cancer.

AS A MEMBER OF THE MEDICAL PROFESSION:

I SOLEMNLY PLEDGE to dedicate my life to the service of humanity;

THE HEALTH AND WELL-BEING OF MY PATIENT will be my first consideration;

I WILL RESPECT the autonomy and dignity of my patient;

I WILL MAINTAIN the utmost respect for human life;

I WILL NOT PERMIT considerations of age, disease or disability, creed, ethnic origin, gender, nationality, political affiliation, race, sexual orientation, social standing or any other factor to intervene between my duty and my patient;

I WILL RESPECT the secrets that are confided in me, even after the patient has died;

I WILL PRACTISE my profession with conscience and dignity and in accordance with good medical practice;

I WILL FOSTER the honour and noble traditions of the medical profession;

I WILL GIVE to my teachers, colleagues, and students the respect and gratitude that is their due;

I WILL SHARE my medical knowledge for the benefit of the patient and the advancement of healthcare;

I WILL ATTEND TO my own health, well-being, and abilities in order to provide care of the highest standard;

I WILL NOT USE my medical knowledge to violate human rights and civil liberties, even under threat;

I MAKE THESE PROMISES solemnly, freely, and upon my honour.

and editorially revised by the 170th WMA Council Session, Divonne-les-Bains, France, May 2005

and the 173rd WMA Council Session, Divonne-les-Bains, France, May 2006