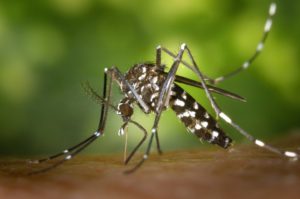 News this weekend of a little boy with brain inflammation after a mosquito bite is a reminder that sometimes mosquito bites can be more than just an annoying welt.

The 6-year-old boy in North Carolina first complained of a headache.  The following day, he had a seizure and ended up in the hospital where tests on the fluid around his brain showed La Crosse Encephalitis Virus.

The CDC reminds us that most people with La Crosse Encephalitis don’t show any signs of illness.  Mild illness with fever, headache, nausea, vomiting, fatigue and lethargy lasts a few days and can appear 5 to 15 days after a bite from an infected mosquito.

While severe illness is rare, children, and particularly boys, less than 16-years-old, are at the highest risk for severe neurological disease which can include seizures, coma, and paralysis.  Death from La Crosse Encephalitis is rare, happening less than 1% of the time according to the CDC.

The CDC says an average of 63 severe La Crosse Encephalitis cases involving the brain and nervous system are reported every year, but the infection is very likely under reported to health authorities.

All this is especially important to remember from July to September when infection is most likely to be transmitted to humans from mosquitos.

To prevent mosquito bites, the CDC recommends the use of insect repellent with DEET, picaridin, IR3535 or oil of lemon eucalyptus on exposed skin.   Click here for CDC Mosquito Bite Prevention information.

Covering up with long sleeves and pants can also help reduce the risk of mosquito bites.  Families can also treat clothing with permethrin, which can even last through several washing cycles.

Click here for more information from the CDC about La Crosse Encephalitis visit.